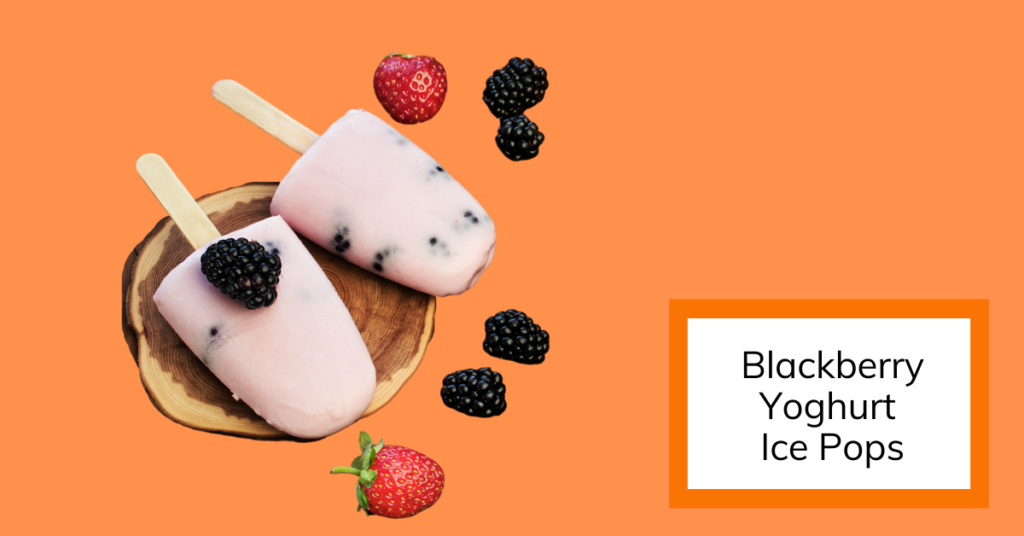 It is so much fun picking berries, but then sometimes it's hard to think of a quick and easy way to use them up. These blackberry yoghurt ice pops are a perfect recipe because they're easy for children to make, and everyone loves a lolly!

If you are in a dairy free house you can use coconut or any other non dairy yoghurt for this recipe. Try to pick a thicker creamier yoghurt as thinner ones can break up more easily when being nibbled.

A few handfuls of blackberries (up to 100g)

2-3 teaspoons of jam or honey (optional)

Lolly moulds (or a DIY alternative, see below)

Lolly sticks if not included in the lolly moulds

A dessert spoon or soup spoon for spooning the mixture in.

A long handled spoon or a flat butter knife for prodding the mixture.

Wash your berries in a sieve or colander and give them a shake to get the extra water off.

Put the berries in a bowl and squash them a little bit with the back of a fork. You don't want them to be super smooth, but you don't want big whole berries either, as big berries can make the lolly fall apart. Just squash it up until it looks like a big lumpy jam!

Add in some yoghurt and swirl it around.

If your berries are quite sharp tasting, you can add a little bit of honey, or even a little bit of jam (just a couple of teaspoons). A different kind of berry jam works nicely with blackberry, like strawberry or raspberry. This is not essential though. The berries and yoghurt taste lovely on their own!

When you think it is mixed how you want it, ask a grown up to help by holding the lolly moulds still while you spoon in the mixture. If they hold the mould over the top of the bowl, it won't matter if a bit spills. When each mould is half full, use a little spoon or a flat knife to prod it to make sure it has gone right down to the bottom and hasn't left any big pockets of air. Then carry on filling it up.

When they are all filled,  wipe down the spills from the top. Put the lolly sticks (or the toppers which came with the moulds) in carefully and slowly so that they slide into the middle and don't squeeze lots of your mixture back out.

When they're all done, put them in the freezer. Make sure they can stand up while they are freezing. If they don't have a stand, use something like an old icecream container to stop them falling over.

The blackberry yoghurt ice pops are ready to eat after about two hours, or leave them until the next day.

If you haven't got any lolly moulds, don't worry. You can make them with silicone cake cases instead or plastic cups.

If you haven't got any sticks you can use plastic spoons, metal teaspoons (although you will have to have a bit of paper towel to hold them when you eat them as the metal will be cold) or if you have any chopsticks left from a takeaway these can be broken in half.

There are lots of variations of this recipe. Here are some of our favourites:

This strawberry vegan version can easily be adapted

Halloween Recipes That Kids Can Make