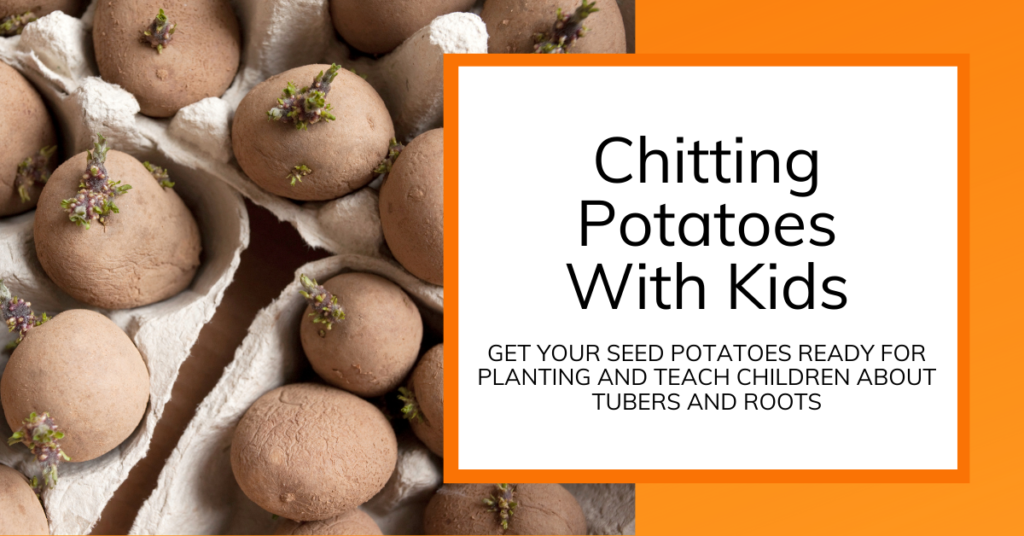 To chit, or not to chit? That is the question that many gardeners argue about. Some gardeners swear that it helps their potatoes to get started faster and produce more potatoes. Others say that they have tried both methods and have seen no difference in yield. But if you're gardening with children, it makes sense to do it, because chitting potatoes with kids presents a great opportunity to explore how plants grow, by observing a seed sprouting before it is planted in the soil

Get children to prepare the growing equipment

Potatoes don't need much to be chitted, they just need some light and something to stop them rolling around. If you are growing more than one kind of potato you need to be able to keep them separate so you know which one is which. Children can help you find something to hold the potatoes. Good examples are:

- a shallow box, or a tray, or used food trays, with scrunched up newspaper or tea towels to keep the potatoes separated and still. 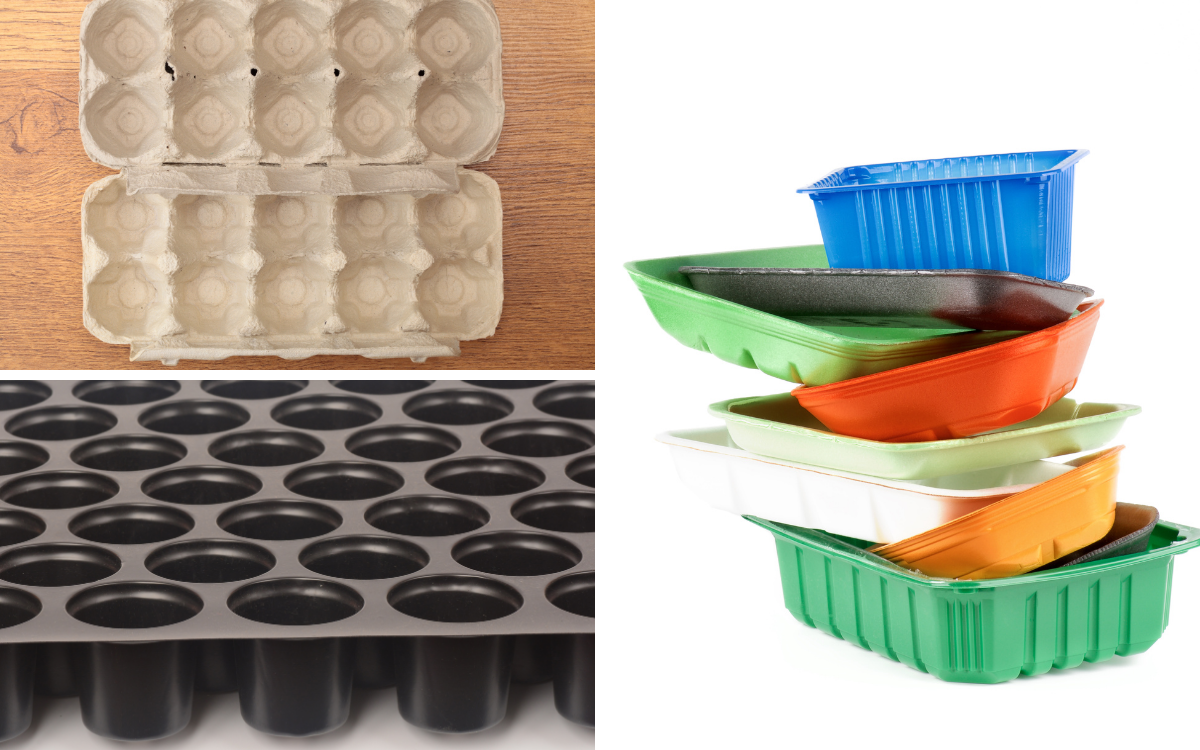 Before you start working with the potatoes, make sure you know which varieties are which. If you have more than one type, then only bring out one at a time, so that they don't get mixed up, and you can label them as you go. Enthusiastic children are not the best at keeping things separate and categorised!

Children can unpack one pack of potatoes at a time.

Take some time to let them observe the potatoes, and describe them.

Are they wrinkled? Shrivelled? Plump? Covered in soil? Clean?

What is the texture like? How heavy are they?

What are the differences in size? Explore the terms for bigger and smaller than. 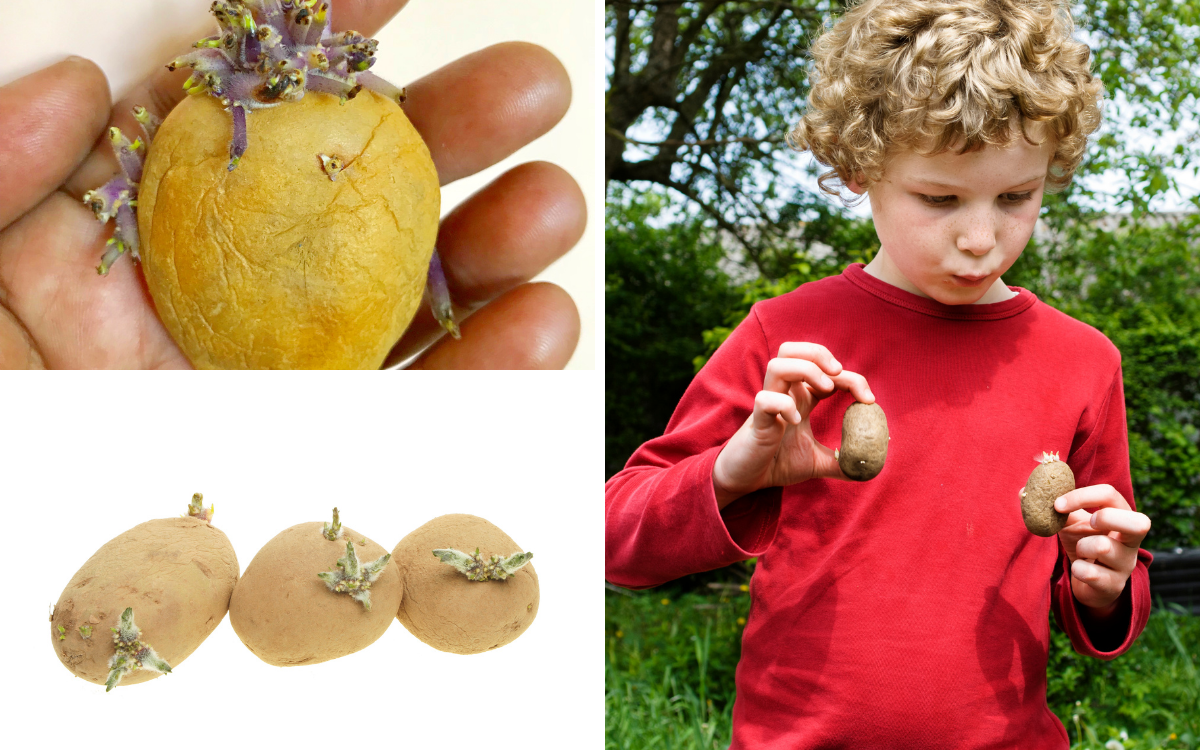 Placing the potatoes the right way up

The point of chitting is to get some good, sturdy shoots started before you plant them. So it makes sense to grow as many shoots as we can.

Children can look at their potato and see how many eyes they can see, and try to tell the difference between just little bumps, and the eyes.

Then they should work out which end of the potato seed has more eyes, they can count them to see.

Put one of your potatoes in to a holder and ask children whether they can guess whether the top, facing upwards, will sprout, or the bottom, inside the holder.

See if they can work out that the side facing upwards will sprout because:

- it has more light and

So once they have worked out that the sprouts need to point upwards, and which end of their potato has more sprouts, ask them to place their potato in the holder the right way round. 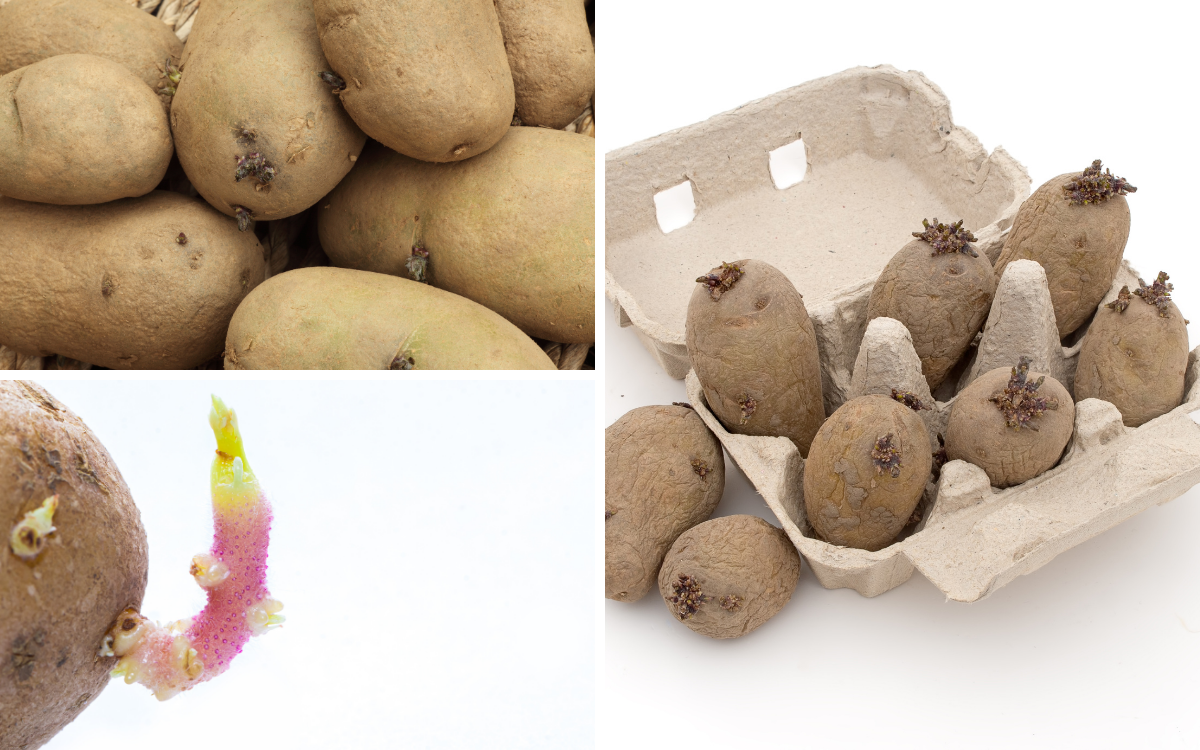 Caring for the potatoes

We want the potatoes to form thick strong shoots. So we must put them in the light, because if they are kept in the dark they will grow thin and spindly as they try to find a light source. You can talk to the children about this and get them to talk about light being important for a plant, and to imagine being a potato and trying to streeeetch to see the light.

But if we put them in really strong hot light they will sprout too fast and too long and we might break them off when we plant them.

So this means that the pots should be kept somewhere light and protected from the coldest weather, but NOT in full sun. A window ledge or cold greenhouse is fine as long as it is not sitting in full hot sun.

Children can notice when they start to sprout. They can see which ones grow fastest. They can see whether they bend towards a  light source and move the pots around to make them grow evenly. If they are getting too spindly they can more them to a slightly less light spot, or put a little shade on the window.

They can check that they aren't rotting, getting damp, that there isn't mould on any of them and remove any that do look sickly so nothing spreads to nearby ones.

You can plant potatoes in late March or April. Traditionally people used to plant potatoes on Easter weekend. You can start chitting up to about six weeks before planting.

Here is a concise video by Love The Garden which will show children the basics of chitting potatoes and how to look for the eyes.