Harvesting green beans with children can be a lot of fun. Children love to hunt among the leaves to try to find the beans, and they can practice using their motor skills to do the picking.
Here is how to explain to a child how to harvest beans, so they can learn: 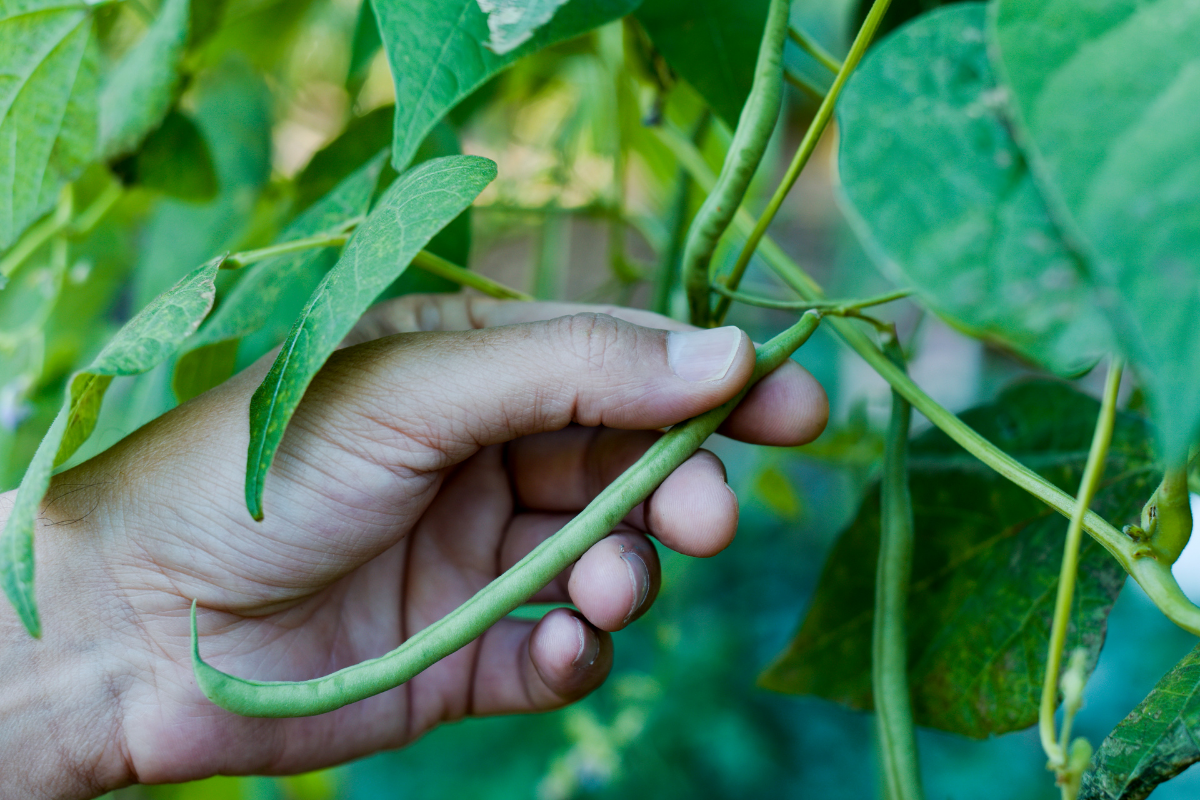 Teach Children To Find Green Beans That Are Ready To Pick

Show children a green bean which looks ready to pick.

Explain that the bean needs to be big enough. Choose for yourself how big that is, depending on the bean:

- For french beans you want it to be when they are long enough and cylindrical enough to be a good bite, but not starting to form beans within the pod yet.

- For runner beans you want them to be long and flat, not too tough or they get stringy. Try to pick them before they form large beans

(For beans which are picked for their bean seeds not the pods, show them the size of the bumps on the outside and then how big the beans are on the inside of the pods. This will usually be harvesting later in the year.)

- Explain that we shouldn't pick them when they are too small, as they need a bit more time to grow.

Show the children how to sweep their hands through the leaves to peep and find the beans. Help them to recognise that they mostly grow in clusters. Make sure they realise that a lot of them grow right near the ground, especially earlier in the season. 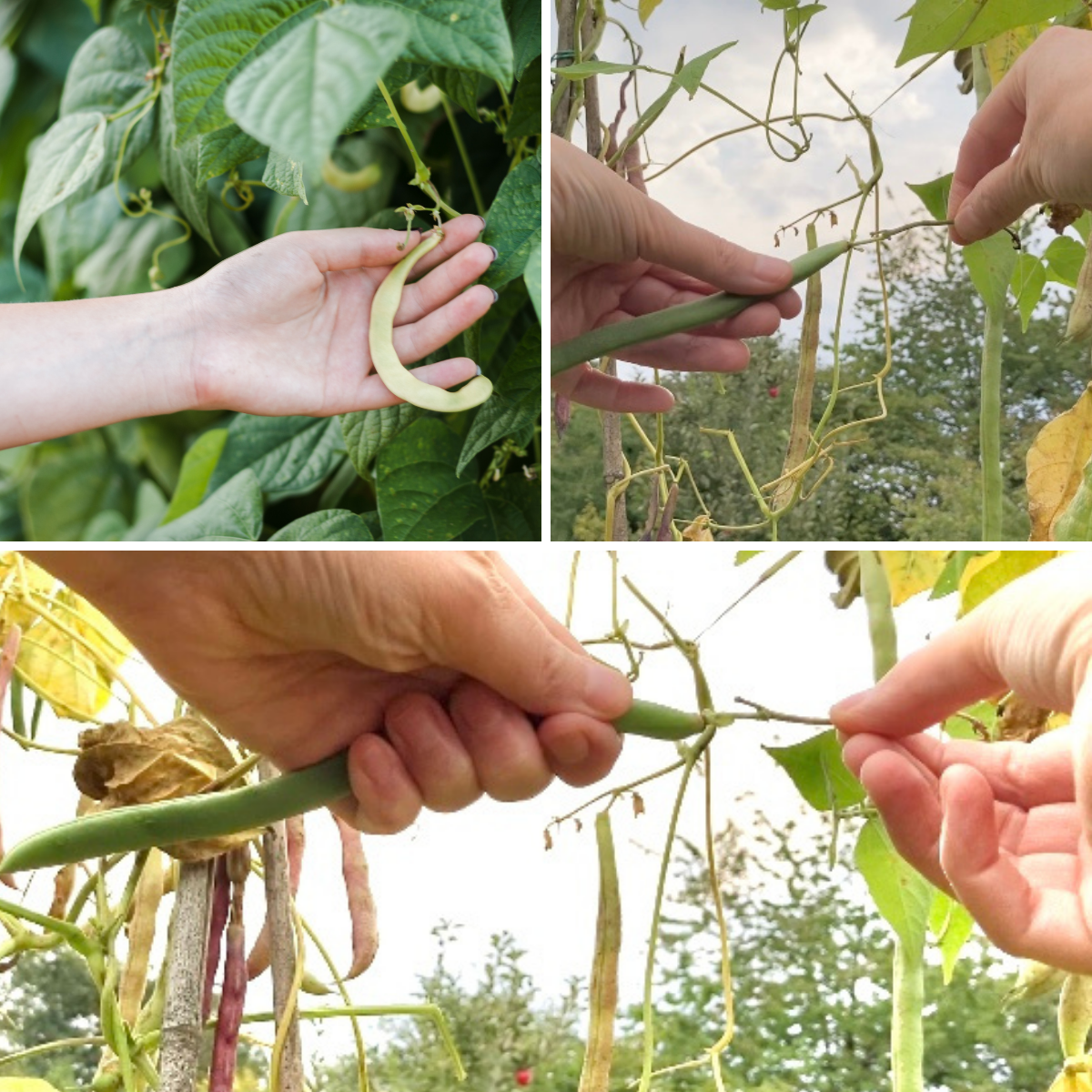 Teach Children How to Harvest Beans

Children can be sometimes a bit enthusiastic when pulling beans from plants. When all of the beans in a cluster are ready, this is not a problem, but when some of the beans are still filling out, it is helpful to teach children how to pull of the bean they want without snapping the whole stem.

Show them how to hold the stem with one hand and then pull the bean with the other. You could describe it like pulling a Christmas cracker, both ends need to be pulled at once.

Show them how to pull a bean or two. If you can find a cluster where it won't matter if you break the stem, show them what can happen when you just pull the bean and the stem snaps. You can show them that some other beans would have been pulled off when they aren't ready.

If you think it would help them to understand you can describe it as the plant getting a haircut. When they have their hair cut it doesn't hurt because the hairdresser is just snipping the hair and not pulling. If the hairdresser pulled the hair with the scissors until the hair snapped, it would really hurt and maybe not snap in the right place.

Help them to practice pulling the beans off a few times.

Younger children who have not yet mastered two handed motor skills at once might find it difficult. In that case you should ask them to find a bean, and identify which part is the stem and which is the bean, and then you can hold the stem and they can pull the bean as much as they want!

Some children get worried about the stem end of the bean getting snapped off (and left behind) when they pick. Explain that this is ok because you would be snapping or cutting the end off anyway before you cook it. So it is fine for them to snap the beans away at the stem end rather than pull them off the stem if they find that easier to do. 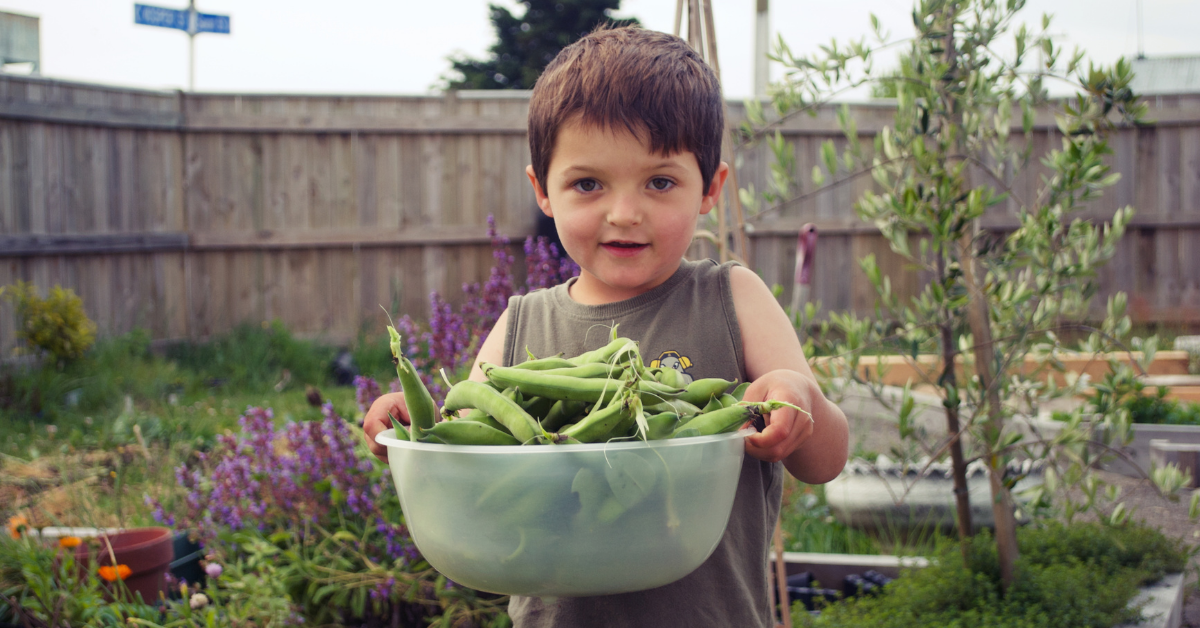 After you have finished harvesting green beans with your children, for a bit of fun, show your children this video by Asa Lift who make farm machinery on Youtube.  This video shows just one of the many amazing machines that farmers use to pick many thousands of beans in hours rather than just the few hundred that we can manage by hand. Watch how the beans go up one part of the machine, the leaves get spit out back on to the land and then finished beans get poured into a crate. Look at how many there are! It's amazing!