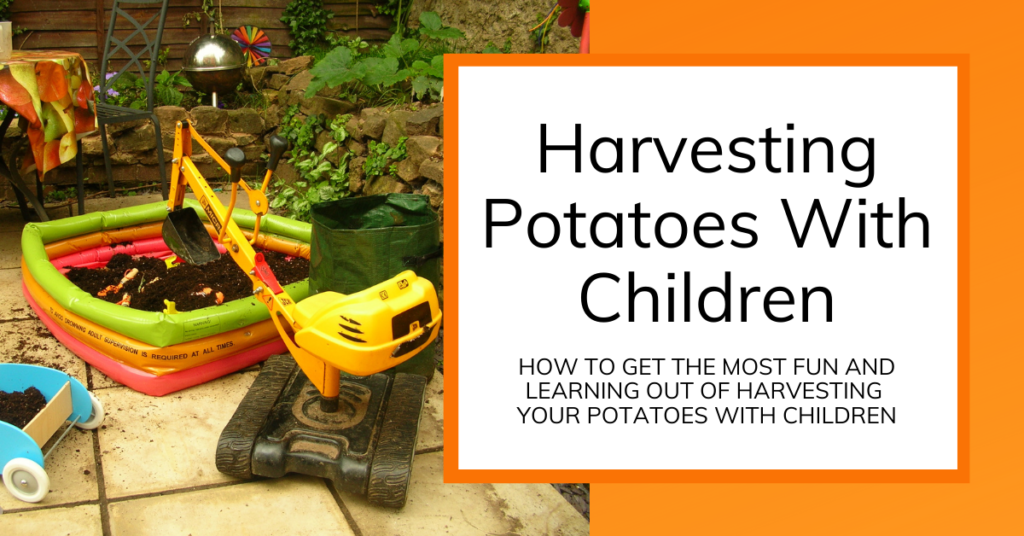 Harvesting potatoes is always magic, for adults as well as children. Putting a fork in to the soil or tipping out a grow bag and searching for the potatoes feels as close to panning for gold as you can get in a back garden. But here are some ways to make it even more fun for children, or to make the second, third and twentieth time still seem like magic and even squeeze in some learning without them noticing. 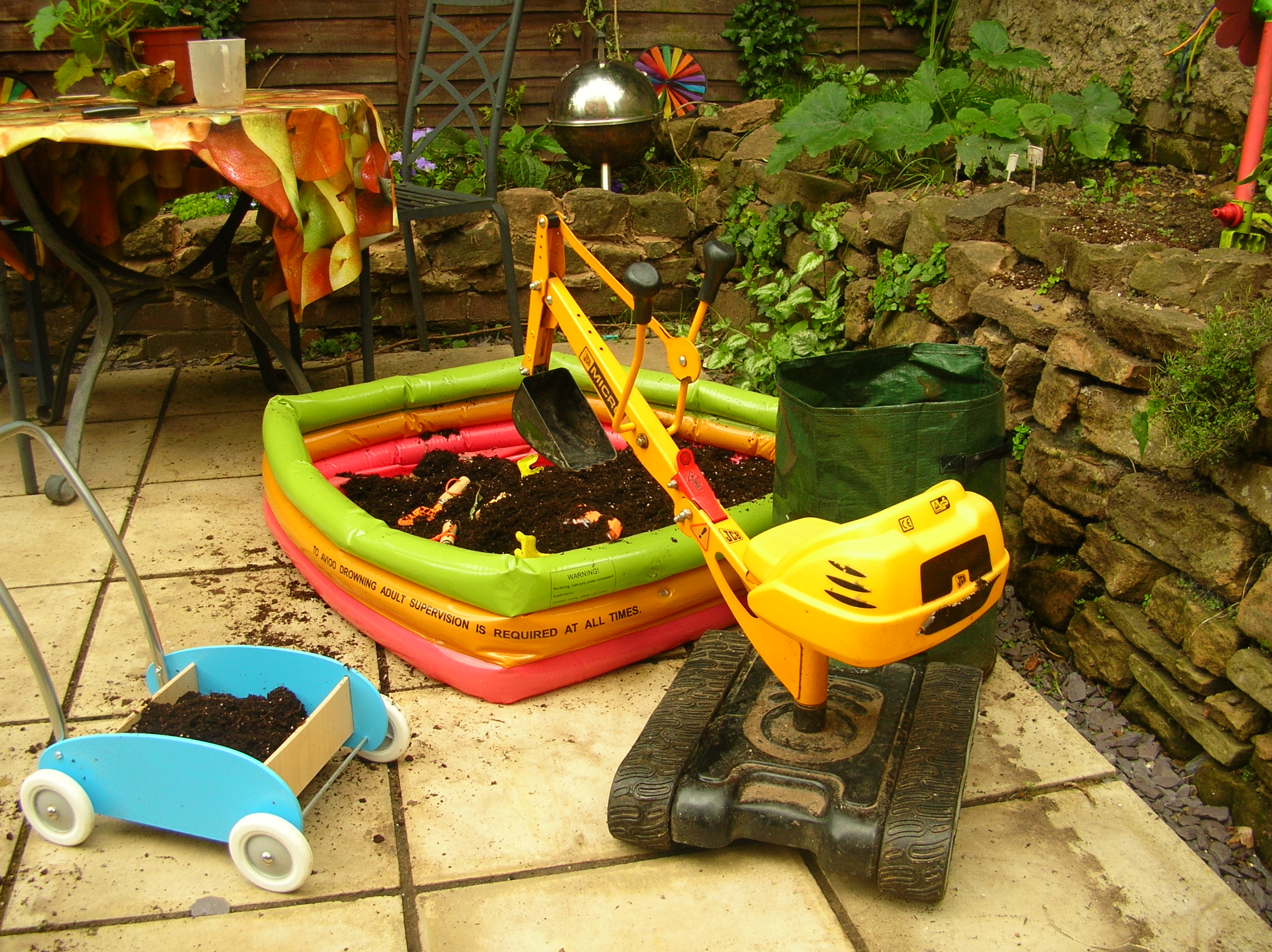 We got this idea from a Nottingham childminder called Jo Watts. She uses a paddling pool to tip her bag grown potatoes into, but you could do this just as well with soil and plants shovelled on to a tarpauling or path, or into a wheelbarrow, depending on how your potatoes are grown.

Get out your sand toys and constuction toys, anything which could be used with soil or sand.

Tip your bagged potatoes out on to a tarp or cover, or into a pool. If you have a bed, then the adult can shovel the plant and soil beneath into buckets and carried to a tarpaulin, or you could shovel them into a wheel barrow and then wheel the barrow to where the children can play.

Encourage the children to use their construction toys to explore the soil, to make hills and valleys, and to "dig up" the potatoes with their diggers. Small handheld diggers and tractors are just as good as the large one shown, it will get children close to the soil.

Encourage them to be observant of any minibeasts they find in the soil. Remind them to be gentle. They can take photos of them to remember them for later, if they like.

Let them play with the toys as long as it is fun, finding the potatoes like treasure along the way.

Another way to engage children for longer when they are harvesting potatoes is to help them to measure and compare yields. 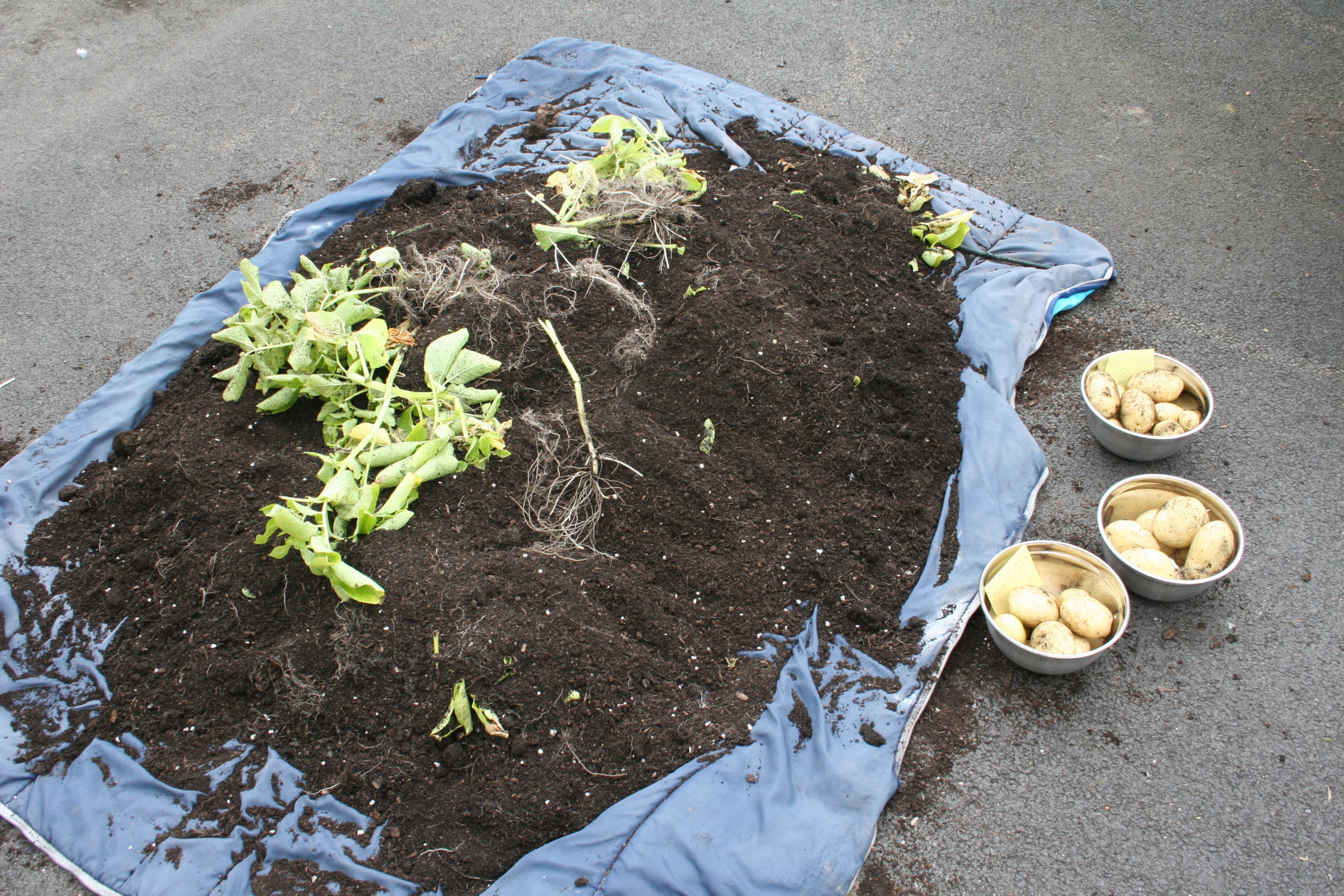 Select three plants to harvest. Have a place to hold a pile (or a bowl) for each plant and a piece of paper for each pile labelled with Plant 1, 2, or 3 and room to write observations.

I have included a pdf printable you can use below, or ask your children to help you make them if you prefer.

Ask the children to look at the three plants and guess which one will have the most potatoes underneath. Explain that this is just for fun and that sometimes we can't tell how many potatoes there are from how many leaves there are because potato leaves start to shrivel up when they get ready to be eaten and so sometimes it is hard to guess.

If you have been growing potatoes in bags, you can tip them out onto the tarpaulin to find the potatoes, or if they are in the ground, dig them up in place.  Ask children to be very careful to find all the potatoes, even the little ones and put them in the pile.  If the children are interested in the soil, the plant parts and minibeasts that they find, let them indulge this curiosity as they go along and talk about what they observe, If they are too excited to measure, you can return to that later. Once you have found all the potatoes, you can get started measuring for each pile:

Ask children to observe the potatoes and see which plant they think made the most amount of potato. Explain that this time you don't mean "how many" but instead you mean "how much" so if they can imagine the potatoes all cooked up and put on a plate, which one would make the biggest meal? This will help them to start imagining volume and mass rather than numbers. Record which plant come first, second and third on estimates of volume.

Get some weighing scales and a bowl to measure the weight of each pile. If you collected them in bowls, don't forget to empty the bowls and zero the scales to include the bowl weight before adding the potatoes back. Ask the children to read the numbers on the scale if they can. If they are too young to read the numbers, tell them the numbers and encourage them to use their fingers to count the numbers to see which is bigger, or use any counting blocks you have. Record the weight and rank them from first to third.

What children can learn from this

Maths: Children can practice a range of scientific skills in this exercise, by estimating, observing, measuring by eye, by counting and by weighing. They can practice counting and working out which number is larger and smaller, and get practice in using scales. Emergent writers can write numbers of potatoes and weights and can either write the words "first" "second" and "third" onto the pages, or "1", "2" and "3" to rank the plants.

Science: As you are harvesting the potatoes, encourage then to look at the root structures of the potato plants in the ground. You can go over the parts of a plant and ask them to point out the different parts. You can ask them to look for minibeasts in the soil. Sometimes children are too excited to measure the potatoes to take a good look while digging them up, so if this is the case, go back to the soil after measuring.

Here are two printable pdfs which you can use to note your observations and measurements.

If you have very young children who will struggle to focus on three plants at once and need to measure each plant as they go along, use the Single Plant Sheet, which has a sheet for each plant. This also does less complex comparisons.

If you want your children to use predictions and estimates, and they can concentrate on measuring three plants at once, use the Comparison Sheet. All three plants are recorded on the same sheet and there is a prediction for potato numbers and an estimate for potato weight.